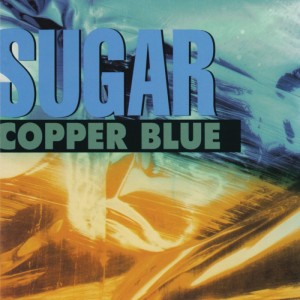 Listening to this album and reading about the history was a bit of an unexpected education – turns out this one is rather seminal. Sugar is fronted by Bob Mould, previously of hardcore punk/alternative-rock band Hüsker Dü who were signed to the independent label SST – the label created by Black Flag guitarist Greg Ginn – and were hugely influential for the post-punk alternative-rock sound that became massively popular in the early 90s.

The first song “The Act We Act” starts with a crunching, distorted guitar riff which gave me an expectation of something heavy and grunge-y, but then the song opens up and sets the tone for the rest of the album. It’s all about big choruses and catchy hooks which reminded me of the expansive, anthem-y sound R.E.M. are famous for, but this has a feel of holding onto something more angsty and with a post-punk attitude still; I wasn’t surprised to hear that Dave Grohl was hugely inspired by Bob Mould’s previous work. The guitar work is powerful in places and I appreciated the drummer smashing the shit out the kit, but it all felt a bit too clean and simple and, at times, rather repetitive.

I might not necessarily feel inspired go back to this album very often, but I did enjoy it and it plugs a gap in my knowledge which I didn’t know I had.