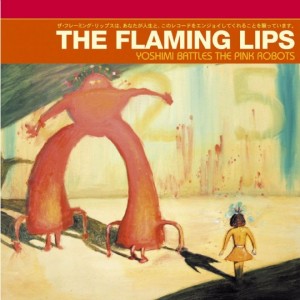 Clearly socialising is enough of a rarity for me that I thought this daily challenge – which requires at least a couple of hours a day of commitment because I still suck at writing – was achievable. Fortunately it is, and so it is. I’m not quite at the point where I’m turning down invites in favour of staying in and reviewing a Flaming Lips album however, and so I find myself a few days behind schedule (I’m basically the British male version of Carrie Bradshaw).

Listening to this album gave me a slightly watered-down version of the feeling you get when watching a Hayao Miyazaki movie. Possibly enhanced by the fantastical narrative of battling killer-robots with karate, almost delivered in story form for the first four tracks by lead singer Wayne Coyne. “Those evil-natured robots They’re programmed to destroy us She’s gotta be strong to fight them So she’s taking lots of vitamins”. Okay, Wayne. The music matches the dialogue so well; it’s essentially simple pop melodies but with an infectious charm which is generated, I think, by a ridiculous over-use of studio effects. The sound really plays out like an anime soundtrack. Hip-hop-like drum rhythms, staccato synthesiser bursts emulating robot cries, and crashes and whistles all stack to feel like a battle scene as heard in “Yoshimi… Pt. 2”. Conversely, on “Ego Tripping at the Gates of Hell”, droning, warbling synthesisers drift around and make you feel pleasantly lazy – such is the tone for much of the second half of the album.

Everything feels a bit more human and down-to-earth in the final tracks. The mode switches to songs about love and life, and you realise that you’re an adult and all the talk about fighting killer robots before was probably a metaphor for something way less cool. Summoning karate girls to fight your insecurities and self-doubt is one thing, creating a likeable sci-fi musical accompaniment is another. It’s different and I enjoyed it.