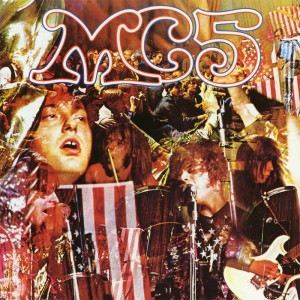 A live-recorded début album is quite an interesting idea – think of all the bands who would never have found success if that was some sort of merciless requirement of the industry – and probably serves MC5 particularly well given their style. For they’re all about creating an almost obnoxious, aggressively energetic rebellion in musical form. It being a live recording means they can capture all the stage energy in its rawness without worrying about the potential buzz-suppression of not having a hyped audience present in the recording studio.

MC5 waste no time in letting us know what Kick Out the Jams its all about. The opening track starts with an address to the audience by whom the sleeve’s personnel details as the “spiritual advisor”. It’s basically some rhetorical far-left spiel intended to incite some kind of revolution, “I wanna hear some revolution out there, brothers. I wanna hear a little revolution. Brothers and sisters, the time has come for each and every one of you to decide whether you are gonna be the problem or whether you are gonna be the solution.” Followed by some punky, bluesy, hard rock and roll. While I think the energy and passion can be applauded, I take exception to using genuine socio-political issues which people have literally died for – Martin Luther King, Jr. was assassinated earlier in the same year this set was recorded for daring to envision fairer ideals – to then use this fabricated, radical stage presence to make sex noises such as heard in “I Want You Right Now”. Do you really want an anti-establishment revolution, or do you just want to use borrowed faux-anarchy to act like tits on stage?

I’m not sure how unfair that is as I don’t have the time to research how invested MC5 were in their White Panther-led ideals. But if ever there was a time to capitalise on the counter-cultural mood of the young, disillusioned American audience it was the late-60s. I thought the music was great though; I appreciated the explosive energy with its raw proto-punk feel – basic but fierce chord progressions and a shit-bashing rock and roll rhythm section – it’s one of the best live albums I’ve heard.