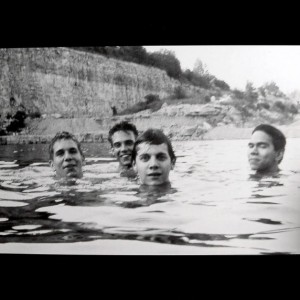 For me this is so definitively 90s alt-rock. Edgy, spoken-word vocals, grungey guitar riffs, odd time signatures, and sounding like it was recorded in someone’s basement. But it’s also way more than that and it’s impossible to explain why without sounding like a pretentious twat. The lyrics are pensive and cynical – and the music reflects that – but it’s so incredibly mesmerising. It manages to be moody but not sulky; the melodies creep and brood and suddenly flair out with controlled bursts like a breaching whale. (told you)

The more you listen to it the more impressive is the amount of tension and atmosphere they create out of extremely simple, yet methodical, song structures. If I was to get technical I’d suggest a large of part of that is down to the dynamics of the rhythm section – and it’s pretty much all rhythm section – the drumming especially. In fact a lot of the attitude for the album is articulated by the expressive drum riffs. The rarity of the outbursts – the moments of unleashing distorted eruptions – make them seem more pertinent than the almost perfunctory use of this kind of form heard from grunge artists of the time.

I had to listen to this one a few times as it always seemed like it was over too quickly (6 tracks in 39 minutes), but I’d listen to it more if it wasn’t time for bed. It lingers for a while afterwards and disrupts your normal state of mind; occupying space in your thoughts as something vast and significant yet inscrutable. So that’s cool.