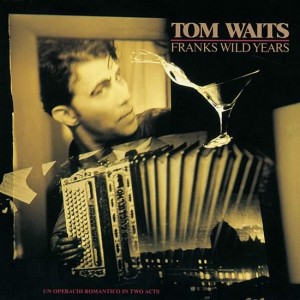 Being a Tom Waits neophyte, I feel like I’m running through a biography or getting a chronological discovery of the development, or invention, of Tom’s character with every album of his I listen to. I watched him on an old Letterman interview recently. He really is quite a character. But there’s something unsettling about realising his off-record persona matches that in his music. Idiosyncratic characters who are that cool exist only in fiction, or so I thought. Maybe I’m wrong and it’s all genuine. Maybe it doesn’t matter.

It’s similar antics to Swordfishtrombone. A return of that peculiar, eccentric jazz sound; aching trombones and accordians, carnival organs, and of course the distinct Waits vocal style which is now an instrument in its own right – of which I can’t decide if its still entertaining or just too distractingly artificial. What I like about Tom is the dedication and intensity with which he’s pitching his individuality. His albums are unconditionally a showcase of his talent; whether that’s a funhouse creation of a mad genius, or a brilliant piss-take. For me it’s fascinating but not terribly entertaining, but undoubtedly the kind of music I support. For sure the world is a better place (as is my musical catalogue) for having Tom Waits and his curious works of Operachi Romanticos.