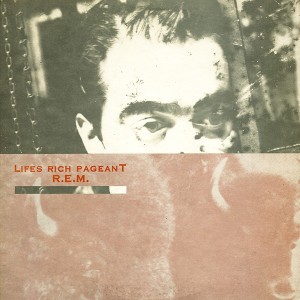 Today I hung up the idea that particularly lengthy reviews were required to keep this challenge authentic. I prefer to see it as drawing on a more succinct style rather than realising this whole thing is eating too much of my time.

It’s not my fault that I’ve never listened to an R.E.M. album in its entirety, because all those that they’ve made since I’ve been paying attention to music have been crap (name a good R.E.M album post-Millennium). Palatable jangle-rock is not something I usually go for, but I have to give some appreciation for a band who seem to fall between genres becoming as successful as they did. Probably too pop-y to even be considered amongst the regrettably edgy, and too alternative to be considered accessible alongside the swath of teeny chart hits. This one definitely falls into the more accessible pop camp with it’s jangly rhythm section and simple up-beat song compositions, but it’s done with such solid musicianship; blending folk and punk and creating a decidedly R.E.M. alternative-rock sound. The overall impression of the album is of sheer quality which never wavers.

Some quick research tells me that this is the last pre-major-record-label album before R.E.M. became huge. There are no hits here, no pretentiousness or pomp (although lyrically slightly of protest and politically active), just 12 solid tracks in 38 minutes.