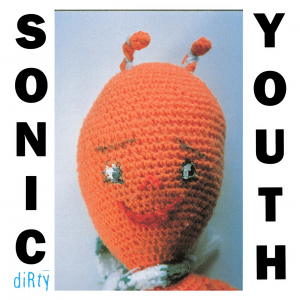 Admittedly sometimes it feels like a chore to begin the listening and writing process every day, especially when I leave it as late as I have tonight (again). But I’m thoroughly enjoying the extreme transitions between genres and moods that this list is providing. Though that’s a purely accidental fallout of NME’s debatable ordering rather than anything calculated that I can credit them with; I hardly suspect they fancied their choices as inspiration for a daily playlist.

From the almost offensively palatable, sanitary serving of yesterday’s 80s contemporary pop to a return to early-90s alternative-rock for today then. I haven’t listened to Sonic Youth before, so I don’t care what they’ve sounded like previously (word is they’ve been better), I just liked this album. It was recorded early ’92 which is only shortly after Nevermind was released, yet this is most definitely that post-grunge sound which wouldn’t take off for a few years. It’s almost like they were aiming for grunge but missed and accidentally stumbled on a punchier, prettier, cleaner-produced alt-rock. You know, the stuff Dave Grohl got rich from in the second half of the 90s.

The album is interspersed with moments of screeching guitars and the mostly spoken word female vocalist, Kim Gordon, going nuts in some slightly punkier sections. And of course I love the explicitly political nature of the lyrics; there’s nothing ambiguous about “Yeah the president sucks He’s a war pig fuck” and “Black robe and swill I believe Anita Hill” as heard in “Youth Against Fascism”. Any form of music that makes all-out attacks on the George H. W. Bush-lead Republican administration is a winner for me. Kim also uses dark humour to bring about feminist issues in “Shoot” and “Swimsuit Issue”. Looking forward to hearing Sonic Youth’s other album later this year which makes an appearance way further up the list.