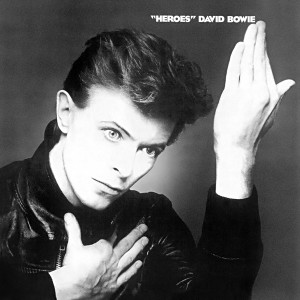 The album title is in quotation marks. What does that mean then? Is Bowie being sarcastic about the hero status of the protagonists in the title track? A song apparently about two lovers either side of the Berlin wall: “and the guns, shot above our heads, And we kissed, as though nothing could fall”. Sure it’s a good song – though more because of how it depicts heartbreak with its increasingly desperate delivery rather than because of how its its chorus lyrics are clumsily taken out of context and presented as something uplifting or inspirational – but it stands alone as the only song that actually works in what is a totally bizarre album.

Apparently he was in a period of artistic exploration while writing this (great) which goes some way to explaining things. Half the album is instrumental with Bowie playing sax on “V2 Schneider”, and koto (Japanese stringed instrument) on “Moss Garden”. The latter a purely ambient track apparently thrown in so Bowie could show he could also write massage parlour music. Pleasant, but more in the sense of it being highly-polished nonsense rather than musically entertaining. “Sense of Doubt” just about fits in with the first half of the album; sinister, striking piano bass notes followed by some equally ominous ambient synth work and that’s it – no percussion, no vocals – yet somehow works to create a mood consistent with the spirit of the times (70s cold war era Berlin).

Robert Fripp is about the only thing going for the vocal tracks on the first half of the album. Apparently he was asked by Eno to participate despite his self-declared retired status, so he flew in and recorded his contribution to the entire album in 6 hours. But apart from Fripp’s input there really is nothing going on here. It’s a series of banal, uninspired compositions thrown together so Bowie could deliver his conspicuously-curious lyrics and posed style. I don’t get it.