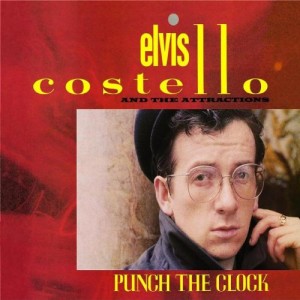 So far I’ve been true to listening to one album a day. I did indeed listen to this on Friday but it’s now 12:33 am on Sunday as I write. Some days it just won’t be feasible to find the time to write something down and so I’ll be playing catch-up. This is one of four Elvis Costello albums on the list and its first occurrence is also my first proper chance I’ve given Elvis to impress. Unfortunately though it didn’t.

Some people don’t like pigeon-holing artists into genres for fair reasons, but for me it’s a practical, first broad stroke which helps me discuss (in my head) what I’m listening to. What is Punch the Clock though? It doesn’t necessarily matter that I can’t decide where it falls – though in the end it feels like it fits into conventional pop more than rock – but its lack of forcing me to recognise a style kinda makes the whole thing ultimately seem a bit tedious, drawn-out, and totally forgettable.

As far as I’m concerned there are maybe two good songs on this album at a push and the rest seem rather insignificant. “Shipbuilding” is not my sort of thing at all but it really is a good song. The lyrics talk regrettably of how the shipyards in England will be revitalised with an impending war (it’s 1983, Falklands must have been pretty fresh still), “Within weeks they’ll be re-opening the shipyards And notifying the next of kin”. The prospect of new employment doesn’t seem worth it to Elvis when the cost is your life. There’s an equally sombre trumpet solo which, together with the pacing and mood of the track, hits a bit of a spot and just makes you appreciate that this is a really well-written song.

It’s not enough to make me come back for more though. Decent song-writing sometimes just doesn’t cut it and in this case it didn’t stop each song from sapping my enthusiasm a little more until after 13 tracks it was all but depleted.