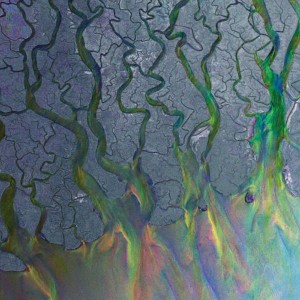 This is a bit more than just another indie-pop album created by some nerds with a penchant for geometry and bizarre sexual innuendos; their name being the method for deploying a triangle on a mac (or rather the Greek letter Delta, which in physics we use to denote the change in a variable or quantity – interesting), and lyrics such as “triangles are my favourite shape” or “In your snatch fits pleasure, broom-shaped pleasure Deep greedy and googling every corner”. Beneath the geometry-referencing lyrics and the album’s apt pitching, oblique production is a very accessible and reassuring sound. Not in the same vain as the easy-listening achieved by repeating a hashed-out, dependable formula though, but instead through something more profound and unique. Basically that sound that every indie-dance-pop band has been trying and, in my opinion, failing to achieve for about the last 10 years.

The varying musical styles ebb and flow; at times a chilled, folky emptiness, at others brimming with layers of electronica. This is layers done right though – each one carefully thought about and adding a dynamic that compliments the others and keeps the album percussive and melodic – it never feels bloated or saturated with contrived nonsense filler (unlike others in the genre). Even the various interludes work to stitch it all together – calculated breathing spaces, not lulls – creating an album that seems natural in its flow.

Perhaps I’m not acquainted well enough with the genre, but I feel like this is a sound various artists have been playing whack-a-mole with for the last decade or so and finally, for me, this one hits. I might stick it on my phone to let it bed in some more.