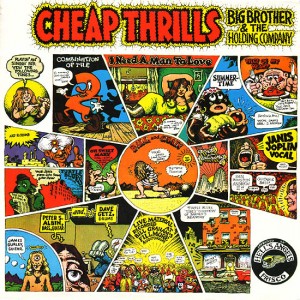 Should I have known that Janis Joplin fronted Big Brother as her first major label record release? Well I didn’t. She’s a stand-out here; sounding like someone’s ripping out her vocal cord while she’s belting out blues vocals over a classic rock and roll backing band. You could say its an almost Robert Plant-esque “banshee wail” but of course Janis was doing it first.

I can’t decide if this really does sound fresh for its age (late 60s release, remember) or if that’s an illusion brought on by the disgustingly stale record of yesterday. Either way it sounds great. The big tracks are raucous, fast and loose, 60s sounding overdrive guitar-led wailing blues/acid rock fracases. Take that image, couple it with Janis’ vocal style and a purposefully undercooked production and it all sums to something incredibly impassioned and musically intense. The quieter tracks are tight and soulful.

There’s some absolute classics here. Obviously the “Piece of My Heart” cover is somewhat a signature for both the band and more so Janis herself. But other stand-outs are “Summertime” and “Ball and Chain”. As far as I’m concerned this matches a lot of what Led Zep ever wrote and, while its peaks aren’t quite as high as LZ’s, Big Brother’s consistency is appreciated which oftentimes is a frustration of mine when listening to Zep. One of the best albums this month.