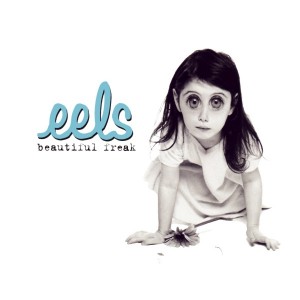 I’ve never given any time to Eels. Perhaps they came a bit too early for me – I don’t think I was struggling with issues of self-worth and isolation at the age of 8 when this album was released – either way it passed me by. So I had no idea what to expect here. It’s a reveal of lead singer E’s mental health (that’s his stage name, real name Mark Oliver Everett – outcast and misfit). Contemporary indie-pop with elements of grunge and basic 3-chord rock indicative of depressed, mid-90s teen anxiety, but in a good way.

Eels create a sound and mood which I have a hard time admitting I relate to; I don’t want to be a part of E’s personal confession of worthlessness any more. But there’s some sort of suppressed engagement going on here left over from those teenage days when I thought I could learn something about myself from albums such as this. And although those days are over now (except for when I listen to Nicki Minaj, so much to learn still) there’ll always be an appreciation for albums like this. I think there’s a wistfully uplifting quality here that’s sneered at and mocked by many, but its a power to those whom it intends to reach.

So although I definitely feel like I’m listening to this album for the first time at the wrong point in my life (about a decade too late), I can’t not recognise how brilliant it is. It’s so well written to perfectly articulate a particular state of mind. “Novocaine for the Soul” was probably their biggest hit from the album and, although it’s a great song, the highlights for me are “Not Ready Yet” and “Guest List”. Both songs feel like downbeat, broken responses to the “oh, just cheer up” line unempathetically suggested by those who fail to understand. I personally won’t be coming back for more, but I bet this one features on the top 10 of many people – birth-year circa 1980 perhaps – and I can see why.