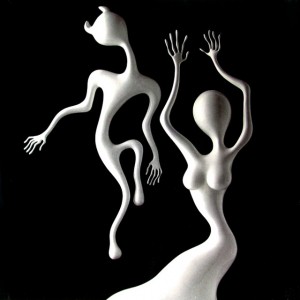 This is the album I needed to listen to today. I couldn’t be more appreciative of how close it brought me to absolute contentment. This is atmospheric space-rock with an incredibly chilled vibe which purposefully forfeits anything musically intricate or obtrusive to create a totally tranquil soundscape. The whole album casually flows and almost drifts by inconspicuously, yet there’s something pleasantly tactile about it; it felt like having a brain massage.

There’s not much to separate one track from another. Much of the album has a similar underlying structure of synth-drone stacked with casually paced, prominent bass lines which give each track momentum and some sort of purpose. And lots of layers, mostly built up from stabs of electronica or occasional reverb’d fuzz-guitar with a garage-rock, almost shoegazing feel to it (but never like actual shoegaze-rock which has been and always will be uncool). It all comes together to create something quite cathartic, blissful, and dreamy, but not boring.

I’d never even heard of Spiritualized before now, so it surprised me to see that this was released in ’92 and that they’ve been kicking about for a while – it certainly doesn’t feel dated at all (apart from the reminiscent 3-d render album cover, there’s really not much linking this to the 90s). Apparently the best is yet to come with their other album appearing at number 156 on the list. Lazer Guided Melodies was great though.