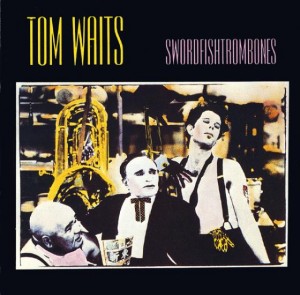 It’s Sunday and I’m only just writing something about last Tuesday’s album. It’s a shame that I feel like I’m rushing this one through as I would presumably have a lot more to say about it if afforded time.

It’s not so much that Tom has diverted from the sound of his début album which I listened to three weeks ago – there are still elements of his personal jazz style, though heavy experimentalism for the most part replaces conventional jazz and blues instrumentation – but things have moved on. Swordfishtrombones is much darker, almost sinister with Tom’s now ravaged, harsh voice narrating deadbeat comical monologues such as in “Frank’s Wild Years”. The unconventional production mixed with Tom’s now very distinct vocal style makes this an album which sounds like nothing else. Somehow it’s entirely unique – an expression of Tom’s individual mode – yet manages to still be an album of which its sound is accessible and is within reach of being enjoyable. I really appreciate when artists can do that and I can’t help but acknowledge how well it’s done here.