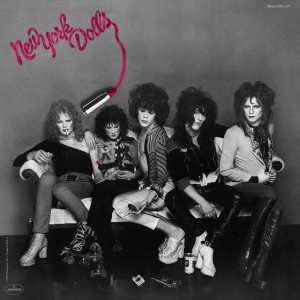 Part of New York Dolls’ advertising campaign involved slogans such as “The Band You Love to Hate”. Creem magazine ran a readers poll which awarded the band both “Best New Group of the Year” and “Worst New Group of the Year”. It’s really not hard to see why, what with their deliberately controversial appearance and attitude (sensitivity to men wearing platform shoes and eyeliner might have had a different meaning in the early 70s than it does today!) – even in the present big pop personalities can divide public opinion. The key difference here is that NYD left behind a legacy and their work would inspire the likes of the Ramones and the Sex Pistols. Their divisiveness had a purpose and their arrogance is vindicated in their becoming canon in a new genre.

The album’s sound is a mix of 60s R&B, early 70s hard rock, and a different kind of noise – such as what is heard in “Bad Girl” in which David Johansen at times barks the lyrics in a distinctive raw, unprocessed way – which definitely sounds like something that punk might eventually evolve from. “Vietnamese Baby” and “Private World” both have that heavier, rockier feel; plenty of drum compression and strong, sticky bass lines.

I can appreciate their don’t-give-a-fuck attitude with regards to their image, and I think that’s reflected in their music which resulted in an album that has a similar personality, but there’s too much left over from that 60s sound for me to really get into it.