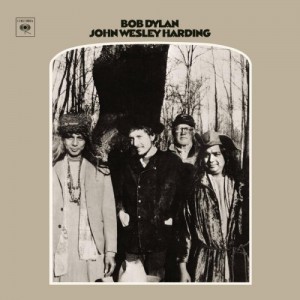 The first of seven Bob Dylan albums I’ll be listening to this year. I’m sure the decision to place this particular one as his seventh best wasn’t as automatic as the predictability of placing seven Dylan albums on the list in the first place, so I’m concious to not prematurely make any conclusions. This is not so much an album, more a collection of frontier-style stories and religious fables and musings sung over an unobtrusive folk-rock musical backdrop. Listening to this now, 49 years after its release, provides an albeit obvious point of reference to observe how far music has come. Not just in the purely musical sense but in whom society heralds as heroes. Maybe it’s a shame that contemporary musicians are not as poetic but perhaps there are other aspects that should be celebrated. If it’s a toss-up between Nicki Minaj using her fame to make serious political challenges and actions against racism or Dylan’s lyrically pretty ramblings  – simplistic and frankly rudimentary in content which they are in this album – I know which I would choose. (and that’s two Nicki Minaj mentions in as many posts)

Maybe that’s a bit of a silly thing to say, and it definitely is a blatant disregard for the acknowledgement of musical evolution as well as Dylan’s efforts in protesting in favour of certain civil rights (so I’ve read about). But if there’s a rebel championing for a better world in Bob it isn’t heard in this album. Instead it’s packed with biblical allusions, religious messages, and the foretelling of the apocalypse – as heard in the best song of the album “All Along The Watchtower” – which all gets a bit tiring and leaves little of substance for me to reflect on and want to come back to.

Musically it’s okay; I’m not a fan of country-blues so there’s not much for me to get excited about here. My main beef is that I feel his characteristic harmonica usage serves not so much as an accompaniment to the music but more a punctuation gratuitously served at the end of every verse. Sometimes it’s deftly delivered such as in “Wicked Messenger” and “I’ll Be Your Baby Tonight”, but mostly I found it grating.