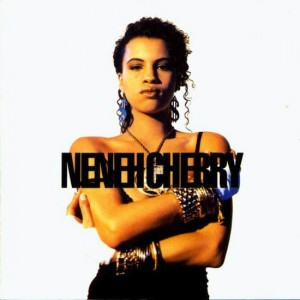 I think Neneh Cherry is cool. She’s empowered, multi-cultured, and full of attitude. This album is so late-eighties – keyboard funk, pop-rap – and has a bizarrely fresh yet simultaneously dated feel. It’s not easy to explain why, perhaps it’s something to do with how Neneh’s background influences the album; Swedish-African, born in Sweden but lived in Long Island and eventually moved to London when she was 15 – just in time to be a part of the punk scene over here. There’s some sort of curious appeal, but it painfully belongs in the decade it was made.

Neneh freely switches between styles and accents to create different moods (vocally, not musically) – sometimes coming across as a hollering New Yorker, other times a lippy cockney – and I can’t decide whether this adds to the charm of the album or is just confusing and disorientating. “Buffalo Stance” is edgy and scowling, making points about sexual responsibility, taking digs at unwanted sexual advances from men and womanisers, and shows a detest of superficial, tacky women. The rest of the album has a similar street-smart edginess – loads of personality and very socially concious. The problem is I feel this is neutralised by a kind of patronising, nostalgic sweetness which gets attributed to this kind of sound in the present day.

I’m sure this is sloppy analysis because in 1989 this may have been seen as a rebellious, witty, and provoking record. It just doesn’t have the same effect today and the result is that it comes across flimsy and somewhat irritating.