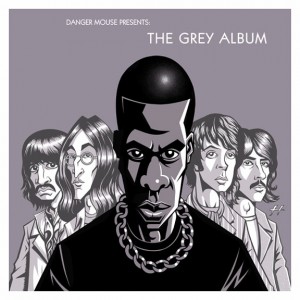 From Brian Burton (Danger Mouse): “A lot of people just assume I took some Beatles and, you know, threw some Jay-Z on top of it or mixed it up or looped it around, but it’s really a deconstruction. It’s not an easy thing to do. I was obsessed with the whole project, that’s all I was trying to do, see if I could do this. Once I got into it, I didn’t think about anything but finishing it. I stuck to those two because I thought it would be more challenging and more fun and more of a statement to what you could do with sample alone. It is an art form. It is music. You can do different things, it doesn’t have to be just what some people call stealing. It can be a lot more than that.”

So the mash-up artist himself has insisted that the listener not be so small-minded as to simply write this off as a simple remixing. Normally I don’t like being told how I’m supposed to interpret media – a pet peeve of mine is when someone insists I listen to/watch something usually with the explanation that you should find this hilarious/brilliant/mind-blowing almost as a compulsory requirement – but in this case Brian may have a point. When you consider the restriction he placed upon himself to create an album sampling only Beatles’ White Album and Jay-Z’s Black Album to create not just something new but, something that actually works, then I think you can just about respect the creativity. For me its a concept that’s been corrupted by certain R’n’B artists sloppily cashing in on remixing pop-punk classics under spurious offerings of creative genius. There’s a point where we must refuse to reinforce ideas that were once novel and made with good intentions before they become perfunctory.

This one doesn’t quite dilute the mash-up pool though. The union of these two particular classics, the disparity of old and new, is something I haven’t heard before and it definitely is done well. It really is more of a deconstruction of both albums – although more a rebuild of the melodies of Beatles reconstructed in a hip-hop style – which I think has to call upon some inventive skill to pull off without it sounding shit. Really though it fails to hold my interest for very long and once the novelty has worn off after the first play-through I’m left feeling entirely indifferent about it.