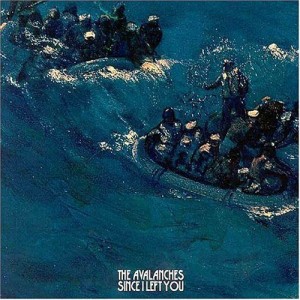 Clearly there’s a line between creative musicianship and simply re-releasing other peoples’ work under the guise of a ‘remix’. Since I Left You comes nowhere near it though; The Avalanches are utter vinyl nerds who have spent an awful lot of effort collecting records and perfecting their ability to fashion samples from said records into something totally new – a brilliantly-well-composed musical collage deserving of the recognition of creative ability and respect bestowed upon any original artist.

Apparently there are samples from over 900 records present on the album, sincerely plundered from existing records and stitched together to create a comical, upbeat, feel-good album which surely belies the laborious production effort required. There’s definitely summery freshness about it, skipping between elements of disco funk, hip-hop, and simply surreal, yet superb, turntable wizardry such as “Frontier Psychiatrist”. The whole record resolves to some sort of experience of bliss and nostalgia, necessarily consumed in its entirety in order to be appreciated.

It’s a solid album, not just in the context of this challenge but in the more antiquated meaning of album composition. The positioning of each track is deliberate and works to invoke an intentional emotional response – which I think particularly clever given this is an album with no vocal composition bar what it samples – with multiple tracks stringing together themes and lulls only to be built upon and raised to highs later on. There’s absolutely no appeal being made here to the concept of immediately accessible, hastily consumed “hit” tracks that a music career can be made from – even more so since the idea of YouTube-ing singles, which is a market you could argue the industry is positioned around now – this is an album for an album’s sake. Designed to take an hour to listen to; 18 tracks amounting to a record that’s more than the sum of its parts.