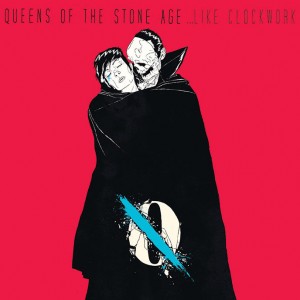 Queens are one of those bands I have a couple of albums worth of tracks shuffling about on my phone, which means that occasionally I get a blast and am reminded of how much I like this band. It’s stoner rock that has a dense, compressed production feel, often hooking on to and riding out catchy riffs in a guitar-based groove. At least that’s what I expected. …Like Clockwork takes takes a bit of a turn though; recruiting the likes of Trent Reznor, Alex Turner, and Elton John, it’s a softer, driftier, more experimental Queens – I can’t decide if I like it.

Josh Homme apparently almost died in the time between this and their previous album which may explain why he is more personal here. In fact there’s a distinct greater vocal presence throughout – at times almost flamboyant – which is not something I’ve previously associated with Queens of the Stone Age. Perhaps as a result of this, and the collaborative effort between the other big-time musicians featuring on the record, there’s a more idiosyncratic songwriting style; less emphasis on seemingly improvised grooving out with monstrous riffs, more focused on expressive, complete songs.

There’s nothing particularly wrong with that, it’s more of an observation which becomes obvious when comparing this to previous work. Queens always had a sound that seemed suited to a small, sweaty, low capacity gig room; intense grooves with much head-nodding capacity. And although this one still has that characteristic heaviness to the music, it feels a lot more chilled-out at times – deliberately swinging between old styles and ballads of new – but the problem is that Queens of the Stone Age sound best when they’re locked-in to that dense tightness of rhythm and riffs, which there’s too little of here for me.