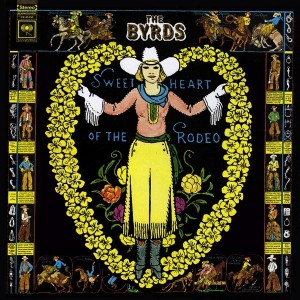 Swinging in the opposite direction to yesterday’s album of the same year, which left me pumped for the concept of counter-cultural ideals mercilessly demanding a shift in how music should be produced and consumed, comes this easy-listening, easily-digestible procession of country & western. This list obviously wasn’t designed to be listened to sequentially; teasing contradicting emotions out of me and not allowing me to settle on them for more than 24 hours. My scrobble list definitely has a schizophrenic characteristic to it now – thankfully my day job doesn’t require me to work with people much.

This is all-out twangy, pedal-guitar, simple country & western rock. It isn’t supposed to be cool (and it really isn’t), but there’s a haunting, melancholy beauty to it at times. Especially felt in “You Don’t Miss Your Water” with its sombre harmonies and heartbroken lyrics. Calling it a “highlight” is generous – more like the rest of the album recedes into the consistent canvas of no-thrills country rock and this one remains as the track which just about made me feel something.

I suppose you’ve got to respect the dedication and sincerity with which The Byrds went all out country rock on this one – I think it was a bit of a turn for them. It didn’t inspire me to return to my cattle-herdin’ ranch days, nor is it technically amazing, but it didn’t offend me and is probably decent education for learning where those later, insipid Americana artists would draw inspiration from.

One thought on “Righteous round-up”