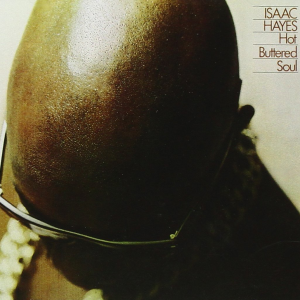 I haven’t surveyed the list thoroughly enough to make comments about NME’s efforts to be equally representative, and I’m only twelve days in, but something tells me a departure from white man playing guitar will be scarce enough that it should be savoured when it comes. Disappointingly then, I only managed to squeeze in a handful of plays of Hot Buttered Soul today, but that was enough for me to notice some disparities between this album and the sort of soul music I’ve been exposed to until now.

“Walk On By” starts of with the familiar love ballad style I associate with one end of the soul spectrum, but when the vocals pack it in the song transitions into five minutes of all-out funk jamming; the bass start going nuts with some 16th note groove while the Hammond and fuzz-effected guitar simultaneously freestyle solo until the song closes out. Then there’s “Hyperbolicsyllabicsesquedalymistic” which is a fully reclined, slow-paced funk soundtrack for floating down a lazy river – with very little vocal interruption to what is essentially a totally chilled instrumental freestyle jam session. These first two tracks are about 12 and 10 minutes respectively and it’s appreciated.

Some brief research reveals that this album is considered a landmark in the soul genre, and important for black pop music. This surprised me and changes my opinion about what soul is and where it comes from. I realised that what I thought was soul was more a caricature – excessive sexual references and preaching about what love is. And although there are moments in this album that fit that misconception, it mostly proved me ignorant.

One thought on “Spreadable funk”