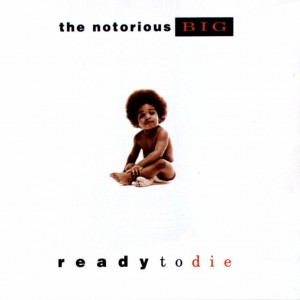 This was the album that brought an end to West Coast domination of hip-hop, was the first album on Puffy’s Bad Boy label, and made Biggie an instant legend of the genre. He raps with a sense of humour and self-awareness and, while I found it funny where I was supposed to, it was also quite tragic; rapping about issues of death, crime, and his precarious existence as an ex-drug dealer.

Biggie has a laid-back form with an easy-to-follow lyrical style and flow, for a hardcore hip-hop album I found it very easy listening. And he obviously has a lot of fun being Biggie Smalls (apart from all the shit stuff obviously); it’s almost like he’s playing the character of Biggie as he refers to himself in third person and remarks proudly on what he’s apparently known for – which is either sexual or criminal in content, or bombastic blasé attitudes to life events which would make other people nervous. That attitude is the sad part for me though; it’s almost as if he saw his early death as inevitable and was very aware of his outlook given his Broolyn-raised background: “If I wasn’t in the rap game/I’d probably have a key knee deep in the crack game/Because the streets is a short stop/Either you’re slingin crack rock or you got a wicked jumpshot/Shit, it’s hard being young from the slums/Eatin five cent gums not knowin where your meals comin from”.

When he’s not talking about the “Everyday Struggle” or being “Ready to Die”, he’s romanticising criminal activities such as in “Gimme the Loot” and “Warning”. His lyrical humour and attitude combined with the funky, laid-back production of the album give it all a bit of a charm though. I don’t care at all for hip-hop politics and I’m not seduced by the drama of the massive rivalry that he and Tupac got caught up in (or any of the hard-man posturing made by today’s hip-hop artists), I just think he’s an interesting character it’s sad that he died so young -I liked his album.