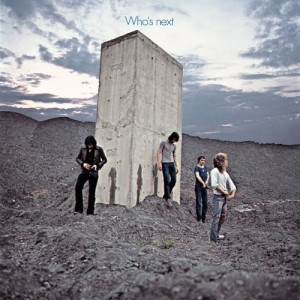 I happen to think modern music owes a lot to The Who. I also like to think that slagheap they’re pissing on is the 60s. “Baba O’Riley” begins the process of relief (territory marking?), assertively opening one of the greatest rock albums of all time, and “Won’t Get Fooled Again” climatically concludes it – zipping back up and tucking in their belts. There are other elements of anguish and heartache, but what’s most evocative is the apparent resentment and disdain for the “teenage wasteland”.

Keith Moon bashes the shit out of the kit the whole way through and Pete Townshend’s new-found use of synthesisers provide that iconic sound to his energetic acoustic rhythms. These three elements more than anything else, I think, give the album that easily recognisable sound; unequivocally identifiable as The Who.

I’m still woefully behind with my writing but, spending the best part of the day playing this one through several times was probably worth it.