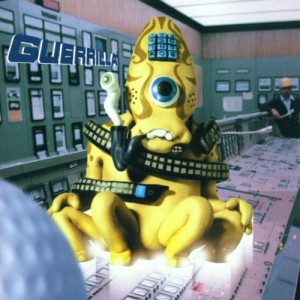 There are many parallels between embarking on this challenge and doing a PhD. Namely that I’m apparently very good at doing it every day for a couple of months followed by 6 weeks of total capitulation and questioning why I’d ever started. But part of being an adult, I’ve grudgingly learned, is knowing the relative consequences of failure for both and to whom it is most important to keep happy. Which is why I’m reviewing 25 Feb’s album on 8 April and consequently why I still have a job.

The truth is sometimes you just really don’t feel like doing something. And sometimes you just really don’t feel like doing something for several weeks. A bit like how Super Furry Animals decided not to record a decent track for some period in 1999 while they were laying down this record. Each song could be the title sequence music for a mid-2000s teenager-targeted sitcom airing during the small hours on BBC3 (RIP/Good Riddance), which puts them in the bizarre and unwanted position of being slightly ahead of the curve for that period of entirely forgettable gaudy popular culture which happened at the turn of the Millennium – it kinda makes me think of Microsoft Word Art. Unfortunately our parents’ generation used up all the nostalgia for things fun and tacky on the 80s. All we get to do now is look back and say things like ‘that was a bit shit wasn’t it’.

Part of me wants to appreciate the varied use of genres that helps create a somewhat original pop-rock album (can’t really argue with that), and even ‘Do Or Die’ is not a terrible track but, somewhere in the middle, there’s a song based on a mobile phone ringtone; visions of trending novelty-based creativity return and all is lost.