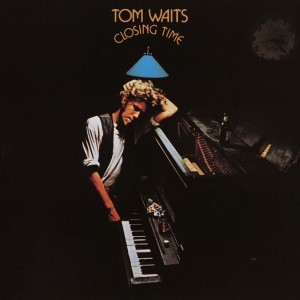 Finally, after many recommendations from people whose musical opinions I trust (yet apparently I ignored), I’m listening to Tom Waits. I don’t suppose I would have ever got around to it if not for doing this challenge. This is his debut album which I think is important to consider prior to forming of any opinions. Apparently he experimented a lot more with his sound in later albums so I’ll be sure to give those a listen before I judge. (three more of Tom’s albums appear on this list later on)

The music is very visual. It conjures up images of him sitting in a dimly-lit, upscale club, tumbler glass on the piano top, forlornly and reluctantly entertaining the evening’s patrons with his lazy jazz, cocktail piano musical style and husky voice. The down-tempo lyrics match the musical style; sometimes desolate and of loneliness, and sometimes narrating a story in the more upbeat jazz songs. I never felt like the album wasn’t entertaining. It starts off making you feel a bit dispirited but I think his style is too strong in the end, with his vivid and articulate vocals, which just about keeps the whole thing barely enjoyable.

I kinda dig the style, but I’d definitely had enough by the end of the album and didn’t feel a strong need to come back for more (though I did, twice more in fact, for writing inspiration). He came across embittered and life-weathered which, considering he was only 23 when he wrote this album, is quite clever. The next album of his to appear on the list (in 21 days’ time coincidentally) was written a decade later than this one. God knows what that’s going to sound like after tens more of life to reflect on. Think I might get drunk for that one.