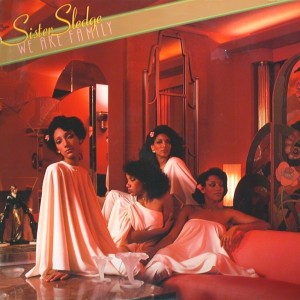 This one came as a massive surprise. All I knew about Sister Sledge came from the obligatorily played title track whenever a disco was happening. Remember discos? Who the hell does discos nowadays? Do schools still put them on for students at the end of term? I bloody well hope not for their sakes. The only thing discos were “good” for was deplorably inflicting pre-2000s disco-pop upon the younger generations. I take great exception to this album being labelled as disco-pop though; this is funk. Disco-funk, but funk nonetheless.

It seems that the sisters’ success here owes a lot to the vision and talent of the backing band, Chic (Nile Rodgers and Bernard Edwards), who composed and produced the album. For the most part it’s upbeat, bass-slappin’ funk which I really was not expecting and which I totally enjoyed. The weakest songs on the album are “Somebody Loves Me” and “You’re A Friend To Me” which both take a diversion from the general funk theme and attempt to create disco pop ballads. I can see why they’re there, but they just interrupt the tempo of the album and serve as distractions rather than contributing anything valuable or novel. The lyrics are totally contrived and fairly insufferable throughout; “He wears the finest clothes, the best designers heaven knows Ooh, from his head down to his toes.” Really?

The truth is this album totally changed my opinion about Sister Sledge – it’s vibrant, funky, and fun – but I can’t help but feel that’s entirely down to the creative effort of the musicians who happened to record this album. So perhaps a more honest appraisal would involve directing credit to Chic rather than Sister Sledge themselves, if that’s even a distinction worth making.