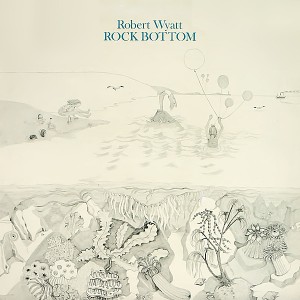 The story for this album goes that during its creation Robert Wyatt was at a party and drunkenly fell from a third story window which left him paralysed from the waist down. Robert continued writing the album from his hospital bed in a trance-like state. The albums’s producer is Nick Mason of Pink Floyd, who at the time were between The Dark Side of the Moon (1973) and Wish You Were Here (1975) – his influence is definitely felt. The result is a dreamy, progressive-rock soundscape which I think rides the line between pretentious, introspective nonsense and actually something totally brilliant.

It’s one of those albums that’s supposed to be heard all the way through as one continuous piece, gradually building an intense, surreal atmosphere which peaks somewhere in the second half – about the point at which it won me over. I think learning of the creation story was important before listening to this album, it’s almost as if the music plays as a soundtrack to his experience during and after his life-changing accident; I felt simultaneous themes of panic and comfort. The unusual melodies and time-signatures are deliberately disturbing and at times there’s so many instruments playing and competing with each other that it seems unnecessarily confusing, but there’s always a jazzy, prog-rock bass line or chord progression which the music resolves to – there always seems to be a conventional and peaceful conclusion to each episode.

Objectively I think it’s a very good album, but owing to my specific musical tastes and the ways in which it appealed to me I think it’s actually quite special. It made me feel like I had heard something pleasantly unique, which doesn’t happen often.